How to track wild hogs 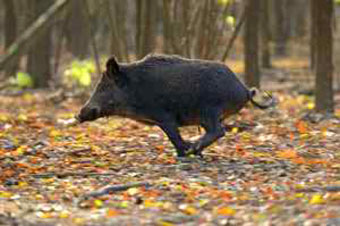 When it comes to successfully hunting hogs, a hunter needs to be familiar with the signs and habits of wild hogs. There are a few common things you can look for.

Hog tracks are the most looked for sign, especially in low line areas where someone can differentiate between a hog track and a deer track.

A hog track is going to have a rounded blunt tip at the end of the toe. A deer track will be similar in size, but will have a pointed toe. The bigger the track the bigger the hog.

Rooting is the most identifiable sign of hog activity. Not too many animals dig in the ground to the extent that hogs do. It's unmistakable and can cause extensive damage. They root pretty much year round, searching for soft roots and other food sources, like grubs. When rooting, they tense their shoulders and dig down, rooting up the ground looking for any kind of food in the soil. They can go as deep as two feet down if the soil is soft and root up an acre or two in one night, depending on how many hogs are in the group. It's major problem when wild hogs root through that much farm land. It will look like someone went through the land with a plow and tore through a huge area, which is why they're such a nuisance.

Rubs are another common identifier of hog activity. Hogs like to wallow in mud holes to cool themselves and try to drive off blow flies and other insects. They'll get a thick layer of mud caked on their body and it will keep them cooler for a longer period of time. Then they'll rub against trees to scratch their dry skin and to reduce the number of parasites on their body. There are different kinds of rubs, from occasional to permanent. An occasional rub is used to relieve an itch and a permanent rub is one that is used over and over, mainly near a good wallow. The height of the rub will give you a good idea of how big the hog is. If it's waist high, you know it's a big hog.

Scat is another way to track hogs. Hog pellets are three times larger than deer scat with remnants of hair and bone. Social groups of hogs will often designate a specific area to defecate, which identifies that a particular group of hogs has been in an area for lengthy period of time.

Trails will be found leading into the area where hogs are rooting. Hogs use the same trails over and over again, similar to cattle. In areas where hogs have been present for many years with a large population, these trails will be worn deep into the ground.

Our experienced staff at Hog Wild will help you identify these common tracking techniques and answer any questions you have about tracking hogs. Call us today to schedule your next hunt, 464-9453.