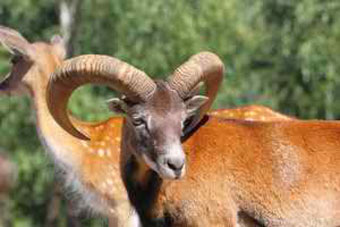 Maybe you’ve been hunting for a while now and have started to get bored. Or maybe you’re just looking for a new hunting experience. If you’ve been a life-long hunter, it’s likely you’ve hunted all the game animals native to Oklahoma.

If you’re ready for something different, an exotic hunt may be the answer. We’re working on offering exotic hunts in addition to the wild hog hunts we’re known for.

Corsican rams are a breed of horned sheep that have become a popular exotic hunt. In fact, over the last several decades they’ve become the most hunted exotic animal in the US.

One of the reasons for their popularity is their value as trophy game. Corsican ram horns continually grow and reach massive sizes, sometimes weighing as much as 30 pounds. They’re an impressive addition and “must-have” for trophy hunters.

Fallow deer are another popular option and a great trophy animal for collectors. Originally from central Asia, fallow deer can grow as big as 225lbs with massive antlers on mature bucks.

They offer a introduction into bigger game and many hunters hunt fallow deer on the path to animals like moose.

Ready or looking for something else?

If you’re interested in hunting Corsican rams or fallow deer, definitely let us know and we’ll work on getting your hunt scheduled.

Or maybe you’re interested in hunting other exotics? Give us a call with your idea and we’ll do our best to make it happen. If we can ethically and cost-effectively source the animals it’s likely your hunt is doable. We’re always looking for new hunt ideas, so bring them on.