Why are hogs such a nuisance? 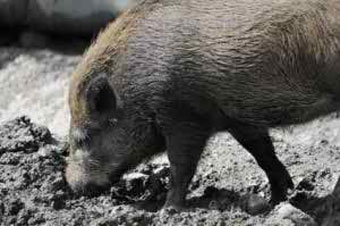 If you've ever seen the damage a group of hogs can inflict on farmland in one night, you know how much of a nuisance hogs can be. In some areas ecological balances have been devastated from the presence of wild boar.

Wild pigs (also known as wild hogs, wild boar, or feral swine) dig deep into the ground, tearing up the soil with their tusks, searching for soft roots and protein sources like grubs. If the soil is soft, pigs can go as deep as two feet down and root up an acre or two in one night, depending on how many hogs are in the group. When the hogs find rich farmland full of grubs and vegetation, it can be a disaster for the farmer who is growing crops to feed their family or supplying produce to the community. Pig rooting causes extensive damage.

It's not all bad, a lot of times farmers will get insurance money for hogs tearing up their land. But farmers won't be able to grow produce again until the hogs are eradicated from the area. Which is easier said than done.

Hogs populate fast. They have 3 litters a year of 8 to 10 hogs, averaging 20 to 30 babies a year per sow. Additionally, hogs are nocturnal animals and hunters can't harvest them fast enough. Hogs are constantly overpopulating and continuing to move north. They're growing faster than areas can sustain them. It's become a ban of movement where hogs have substantial numbers in Texas, big numbers in Oklahoma, and now they're getting into Kansas.

Wild hogs aren't native to North America. The first wild pigs in the United States originated from domestic stock brought to North America by early European explorers and settlers. It wasn't until the 19th century that Eurasian wild boar were introduced into parts of the United States. The animals were released into the wild by wealthy landowners as big game animals. The initial introductions took place in fenced enclosures, though several escapes occurred, with the escapees sometimes intermixing with already established feral pig populations.

In areas where domestic pigs and Eurasian wild boar were found together in the wild, interbreeding occurred. Today, many hybrid populations exist throughout North America.

In order to hunt hogs at night in Oklahoma, farmers have to get a depredation permit issued but the department of wildlife for that county. If a farmer has a hog problem, the farmer will call up the game warden, who will come out and verify it is a hog problem and issue a depredation permit to hunt after dark. Farmers can hunt hogs in daylight without a permit, but hogs aren't nearly as active during the day as they are at night. Without a depredation permit, a farmers best bet is to bring in trappers who capture the wild hogs and pass them off to high fence hunting compounds, like Hog Wild, for hunters to enjoy.