Safety is our primary concern 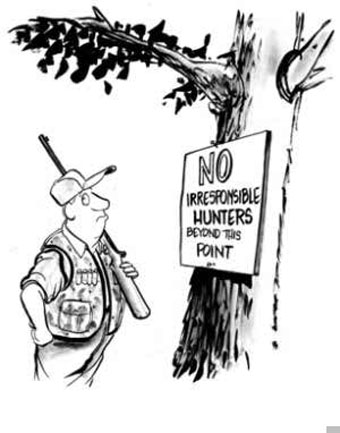 No hunt is a good hunt if someone gets hurt. We take safety very seriously at Hog Wild and make sure none of our hunters start a hunt without being well informed about how to stay safe. In fact, one of the first things we do when hunters arrive is walk them through our five major safety rules.

1. Treat every weapon as if it’s loaded.

Even though this rule is primarily aimed at new hunters, experienced hunters sometimes need to be reminded of this as well.

We reinforce with younger hunters that rifles aren't toys and shouldn’t be aimed at other people, even if you think the chamber is empty. It’s much better to assume a gun is loaded than that it’s not, especially when you're in a group and could potentially hurt other people as well as yourself.

2. Don't load your weapon until you’re in your stand or blind.

Unless you’re in place and waiting on hogs, your gun should be unloaded. We don't allow loaded guns at the lodge or anywhere between the lodge and the hunt site.

Regardless of how careful you are, it’s far too easy for a gun to accidentally discharge when riding on a four wheeler or getting jostled while walking. And having loaded guns around a big group of people being trained or getting ready to hunt is just a bad idea.

3. Stay in your stand or blind until a guide comes to you.

This rule is to keep you, our guides, and other hunters safe, both from gunfire and angry hogs. Unless you stay in your stand, our guides have no way of knowing where you're at and where they should place other hunters.

If you’re wondering around in the woods without your guide, it’s possible you want fall into the path of another hunter and accidentally shot. If you wing a hog with a poor shot, you'll also be better protected in your stand. Wounded hogs aren’t generally very friendly.

4. No tracking without a guide.

The reasons for this rule are similar to rule # 3. If you’re out wondering around, we can't steer you out of the path of other hunters or help protect you from wounded, angry animals. Be patient and stay where you're at until we come to you.

There are several reasons that making clean shots is important, one of which is safety. If you aim too high or low and miss, who knows where your bullet will end up.

Landing a clean shot on a hog is important from an ethical standpoint as well as safety. Again, hogs generally don’t like being shot at. You should be safe in your stand or blind, but making a clean kill shot reduces your risk even further.

All that being said, hog hunting is a lot of fun and can be a great time for the entire family. Part of our focus on safety is to make sure that those fun hunting experiences stay fun.