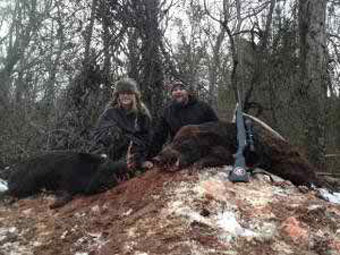 We were featured in the Daily Oklahoman and on NewsOK's website during the month of December! Check out the full article here:

CRINER — Two rifle shots rang out in the distance, and I knew what it meant. My two hunting companions on this cold December day probably had just downed a couple of feral hogs.

It was getting late in the afternoon and I began to fear I would be the only member of this hunting party not taking home pork at the end of the day.

I had been sitting in the hunting blind for nearly two hours and had seen a half-dozen hogs roaming through the woods, but none had offered me a clean shot.

Two hogs had cautiously braved their way toward a ravine below where corn had been scattered nearby, even sticking their snouts out from under the brush and sniffing around, but evidently I didn't pass their smell test. They turned around and headed back up the hill, protected under the thick cover.

As daylight began to slip away, I started to wonder if I had missed my opportunity. But then another hog came along that was not as wary as the previous pigs.

The big boar stepped into the clearing and walked straight toward me. The hog then turned its head, offering a shot through the shoulder and into the vital organs. The .308 Winchester round dropped the swine dead in its tracks.

One of the perks of being an outdoor writer is that sometimes you get to shoot guns before they make it to the stores, like Smith and Wesson's new M&P 10 semi-automatic rifle in camo.

Another perk is that occasionally you get invited to tag along on hunting and fishing trips, and on this day I was a guest at the new “Hog Wild” hunting operation in McClain County.

I would feel uncomfortable shooting a whitetail behind a high fence, but I have no such ethical dilemma about feral hogs. All of them should be blindfolded and executed for crimes against nature.

Feral hogs continue to overrun Oklahoma. They can be found in all 77 counties.

They have caused millions of dollars in property damage across the state and can spread disease. The state Agriculture Department cautions hunters to wear gloves when cleaning feral hogs and to cook the meat thoroughly.

Pastures uprooted by wild hogs appear as if bombs were dropped from the air. They frequently destroy golf courses and ravage corn and hay fields. A pack of porkers in southern Oklahoma even toppled the headstones at a rural cemetery.

They are such a menace that Oklahoma has even legalized hog hunting from helicopters.

Wild pigs are good for one thing. They are fun to hunt, as Roderick Polston and Cole Brackin, the owners of Hog Wild Outfitters, discovered a couple of years ago.

The Norman residents, both avid big game bow hunters, were looking to satisfy their hunting appetite when the big game seasons closed, so they started hog hunting in Oklahoma.

“What we enjoyed most about it was that you can do it year-round,” Polston said.

They had so much fun hunting hogs that Polston, a tax attorney, and Brackin, an oil and gas man, decided to open Hog Wild.

“We were looking for ways to get involved in the hunting business for several years because that is what we love to do,” Polston said. “It's our passion.”

They bought 130 acres near Criner, put a fence around it, and are now building a clubhouse so their customers will have something to do between morning and evening pig hunts.

They buy feral pigs from Oklahoma trappers and keep around 300 on the grounds, a number they feel ensures a good chance of success but still feels like a hunt. “There are so many pigs in the southern half of our state, we literally have people beating our door down trying to sell us pigs,” Polston said. They persuaded a friend, Matt Wetzel, who used to chase hogs with them on his visits to Oklahoma, to give up guiding for bear, elk and mountain lions in Idaho and move to the Sooner state to manage Hog Wild.

Wetzel said wild hogs are not the most difficult animal he has ever hunted, but they are more challenging than most people think.

Polston said hogs are a lot smarter then people think they are.

“They are a lot harder to kill, especially for a bow hunter,” Polston said. “It's just the way God made them. They are a tough animal.”

The biggest problem Polston and Brackin might face with their new business is staying away. They just opened Hog Wild, and already Polston has killed seven pigs.